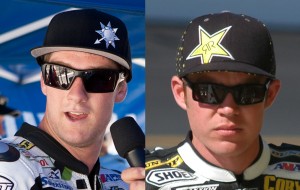 Banks, OR – January 24, 2013 – RSRacecraft is pleased to announce the addition of Cory West to their team for 2013.  Dustin Dominguez  will join Cory West on the EBR 1190RS race bikes in the in the AMA Pro National Guard SuperBike Class for 2013. This rounds out the team with Brandon Cleland who will be racing AMA Pro SuperSport.

Dustin Dominguez has been competitively riding motorcycles since age 9 and in that time has racked up a long list of wins. He’s proven to be a masterful rider and is capable of getting the most out of the machines prepared for him. In addition to success on the race track, Dustin is widely regarded as being one of the most professional and courteous riders in the paddock. He’s never one to miss an opportunity to learn something new in order to take his racing to the next level and is always grateful for his sponsor and fan support.

Dustin Dominguez said “I am extremely excited to have the opportunity to be in AMA SuperBike. I believe I ride a liter bike better than I do a middle weight and I love riding V-twins. I really like the fact that I’m able to ride the EBR 1190RS, an American manufactured motorcycle. I believe with the EBR 1190RS and RSRacecraft behind me, this will be my biggest year yet. This is a professional team that gives 100% at all times. I would like to thank everyone who has ever made it possible for me to chase me dream. I appreciate everything.”

Cory West has been riding motorcycles since age 14 when he purchased his first 250 Ninja and began riding the back roads of his Eureka Springs, AR hometown. Cory has been a top competitor and constant figure on the AMA Pro Racing circuit since 2004 and was awarded the 2009 AMA SuperBike Rookie of the Year award for his efforts. In 2011, West had his best year to date, placing 2nd in the Daytona 200 and another 2nd place finish at Road Atlanta. In addition to securing his own podium finishes, he’s also proven himself to be the definition of a team player and is just as invested in his own success as that of the team’s.

“After the year I had last season, getting this opportunity to race an EBR 1190RS in AMA SuperBike for RSRacecraft is a dream come true. I had the chance to ride the EBR 1190RS last December and look forward to the challenge that is ahead of us. I believe that RSRacecraft will build me a top notch Superbike and with my hard work ethic and their dedication to win, we will be a strong package for 2013. I’d like to thank Erik Buell and Ronnie Saner for helping put this deal together and I can’t wait to get on track and get down to business.” stated Cory West

RSRacecraft owner Ronnie Saner comments “I met Cory in early 2009 at a DSB test.  I enjoyed his straight forward “workmen” like attitude then and am excited to use that and his extensive road racing experience to achieve great results in the coming year.  I also think Cory will be a great teammate and mentor to the two other riders on the team.  All three riders on the RSRacecraft roster this year have a calm and friendly nature about them that make them a joy to be around.  They also all three share a fierce competitive spirit which will ensure dynamic track performance.” 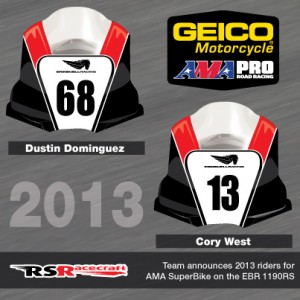