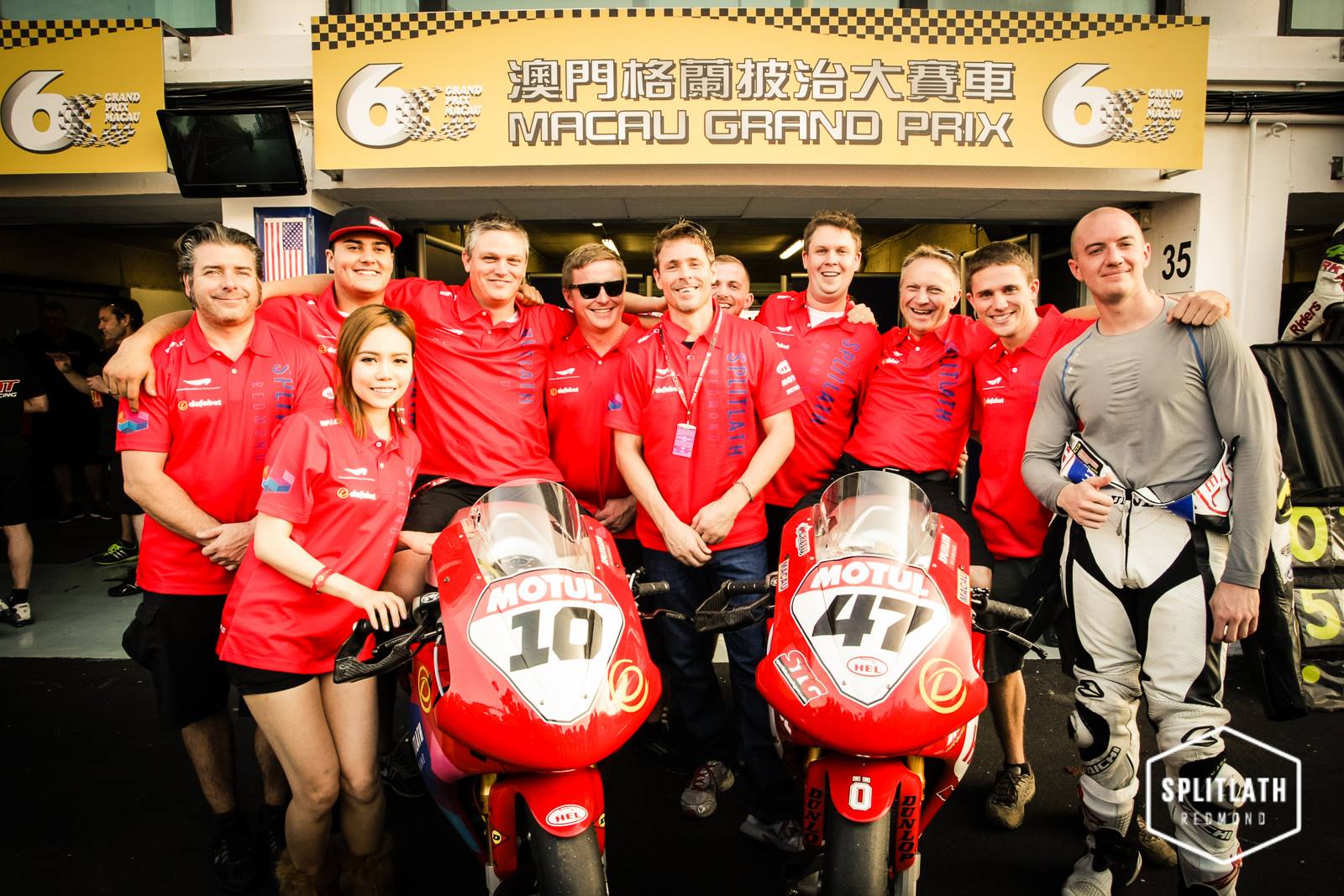 For a few lucky riders from around the world, November is something to look forward to every year, a month where one of the oldest and most prestigious road races in the world takes place…the Macau Motorcycle Grand Prix.  For those unfamiliar with the event, the Macau GP is a true test of a riders mental and physical strength, challenged only by the Isle of Man TT in terms of what it takes to compete.  The 3.7 mile course snakes through the streets of Macau, China, considered by the world to be the Las Vegas of Asia.  The course is lined entirely with steel armco barriers in their recognizable yellow and black color scheme.  Behind the barriers are hotels and casinos lining the course, it is one of the most unique places to race a car or a bike in the world.  It has become an infamous circuit in which there is no room for error, no run-off for making mistakes, and there is no availability for a lapse in concentration.  It is also one of the few races that combine the top car racers in the world, running races in conjunction with the best bike racers in the world.  You feel like a gladiator entering the arena when you go onto the streets of Macau.   There is absolutely nothing like it…

2013 marked my third journey to Macau and my second appearance as a competitor there.  The people involved in the event; organizers, teams and competitors alike, have become like a second family to me and I look forward to going back every year.  This year at Macau was already looking extremely positive and I had high hopes for what could come out of it.  I had worked hard from the time the TT ended to put together a solid effort for Macau, I wanted to show up with a professional and fully capable team, we did that and then some!  I was lucky enough to have long time supporter, sponsor, and friend, HEL Performance, come back onboard along with MOTUL to back my effort.  With this backing I was able to bring AMA Superbike team, RS Racecraft, along for the journey with their unique EBR1190RS superbikes.  The EBR1190RS is Erik Buell’s own creation after he created EBR and was able to have full reign to build the one and only, proper American sportbike.  I was so excited to ride this bike at Macau, it is a loud and nasty beast of a bike.  No rider aids like traction control or anti-wheelie.  It is a riders bike, ride hard and ride fast, the only traction control is your throttle hand.  Luckily we had the full support of Dunlop USA to ensure we had the best tires available to put all that horsepower and torque to the ground and have us running at peak performance.   Once people found out that the EBR would make it’s debut at Macau everyone got excited, all American team, f*ck yeah!  The owner of the British based team, Splitlath Redmond, contacted me and decided they wanted to get involved in the effort and get a second EBR1190RS on the grid with fellow American rider, Mark Miller.  The owner of the team and Mark Miller are both good long term friends of mine who I had always wanted to work with so it was happening, my dream team was coming together.  Two American superbikes, two American riders, all American crew, now that’s a story!

We arrived in Macau about a week early to do some media events with the organizers, this year marked the 60th anniversary of the Macau GP so it was an especially big celebration.  While in Macau waiting for our chance to get out on track we trekked over to Hong Kong to do some PR work for Brammo’s Hong Kong distributor where I also got to ride my first electric motorcycle.  Going away from riding a fire-breathing EBR1190RS, the electric bike was completely silent but it was the surprise of a riding career in the way it delivered power and the way it handled.  I was completely taken aback and thoroughly enjoyed the experience.  The whole thing worked out quite well considering I was also working with Icon Motorsports for the first time at Macau which also has heavy involvement with Brammo’s racing projects.  Racing an electric bike in the future….stranger things have happened!

First practice would come around early Thursday morning on November 14.  The bikes are let out on track at 7:30AM, a bit early for my liking but I was just pumped to get back on a bike and back on the infamous and challenging Guia circuit.  I was surprised and thrilled that the circuit came back to me fairly easily.  Every turn at Macau is completely blind, you can’t see your exit and you just have to trust in your course knowledge and riding ability.  I was able to pick right back up where I left off last year and by the end of practice I was nearly back to my best lap time from 2012.  Words can’t even express what it feels like to race a bike at Macau, you are just surrounded by yellow and black steel armco.  The barriers and walls control where you do and do not go, you ride it with respect but it gives you a definite adrenaline rush when you take it all in.  At no other point in my life am I that centered and focused on the task at hand, mediocrity is unacceptable.

After one free practice session teams and riders would get two timed qualifying sessions.  My first qualifying session went well but I was still about a second outside of qualifying time for the race which is 110% of the fastest riders lap time.  We were working hard to get the bike dialed in during the first practice and qualifying as we struggled with the unique handling characteristics of the bike and since we had absolutely no data to work off of from previous years at Macau we were just making improvements with the knowledge we had available.  The team was 100% competent and we were confident we were working in the right direction in terms of bike setup.  Second qualifying came around, I went out to do a few laps and then popped back into the pit lane for the team to quickly put on a new Dunlop rear tire.  This was a brand new rear that Dunlop USA had developed from their AMA Superbike and National Endurance development.  Needless to say from the word “go” I was thoroughly impressed.  Within 3 laps I had put in a personal best lap time and gotten within the qualifying cut-off.  Unfortunately that is when the only hiccup we had during the whole event happened.  Coming out of Fishermen’s Bend, I shifted up to 4th gear and heard a loud pop and suddenly had a loss of power, sh*t.  I quickly shut the bike off and coasted into pit lane…the motor had blown.  I watched the rest of qualifying from our garage as Ian Hutchinson and Michael Rutter continued to battle back and forth for pole position.  Qualifying ended and even with only getting 3 solid laps, I had made the big show.  I would be entering the proverbial arena to do battle with 31 of the best real road racers in the world.

The team worked feverishly to get the new engine in the bike on Friday afternoon, within three hours they had the bike looking back to showroom condition and purring like a kitten…errr more like a lion!  We mounted up a new set of US made Dunlop’s and I was ready for race time.  This was the first time in a long time I had gridded up for a race and been completely focused, completely centered, completely content with how the whole endeavor was shaping up.  I was having fun, I was pumped to ride.  Words can’t express how good that feels.  We had an awesome team and great sponsors behind us, let’s put it all out there!

Race time came, the EBR1190RS is a monster off the start.  I passed a few bikes by the first bend and tucked in behind the pack heading through the fast 5th gear right hander, “Mandarin”, before heading down the main straight, clocking in upwards of 170mph.  As I came into the first turn I saw what looked to be a pile up of bikes occuring…apparently another riders ambition got the best of him and he came into Lisboa a bit hot, taking out another rider and subsequently causing quite the disarray of bikes as riders avoided each other and tried to get back into a formation to continue the race.  Luckily no one was injured and no red flags were thrown so the race continued, business as usual.  I put my head down and continued to click off consistent lap times but was in my own race for about 4-5 laps, just chugging away, until a faster rider came by me, at that point it was game on.  By the sixth lap we had a group of about 4 riders battling for a top 20 finish and it was a back and forth dog fight through the armco lined streets of Macau.  I had quite a few shoulder scraping incidents as I pushed harder and harder, which also landed me a personal best lap time of a 2:37.4!  Something about racing with a group of great guys you’ve known and trusted for years around a course like Macau just gives me a different level of excitement and accomplishment.  It was really some of the best racing I had ever had the privilege to be involved in.  On the 13th lap a fellow competitor crashed in the esses on the mountain section of the course which brought out a red flag as his bike was in the middle of the track.  Since the race was more than halfway complete, they called it a finish.  I was in 20th when it occurred which meant I had just landed my first top 20 at the Macau Grand Prix!  Stoked doesn’t begin to describe my feelings after the race.  My goal going into the event was to have fun, get a top 20, and run a personal best lap time…I would say we accomplished that and then some!

The 2013 Macau Grand Prix was truly my favorite and best racing endeavor of my career in retrospect.  We had an amazing team, all a great collaboration of minds and talents that pulled it all together to show the world some awesome new bikes, the EBR1190RS.  Our sponsors were all with us 100% and we couldn’t ask for a better group of organizations to be involved with and these words don’t even express how honored we are to represent them at an event like Macau.  Time will tell what the future brings but things are already in the works for 2014 and I can’t wait to make some announcements in the near future!  Thank you everyone and stay tuned…